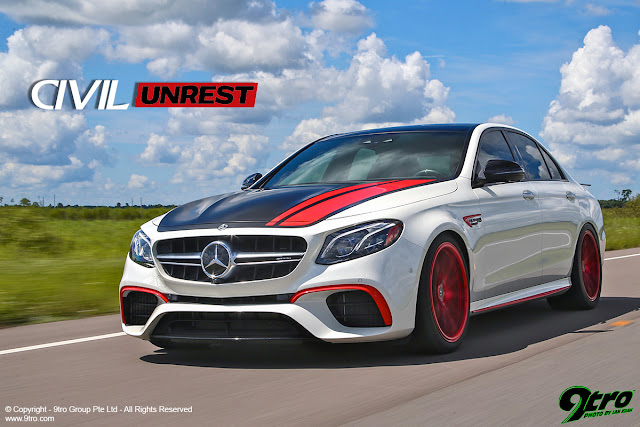 Economies of scale give car manufacturers a big incentive to use the same engine across several model lines. However, things are not quite that simple, and while it is true that when you make more of something the unit cost drops, it does not always make sense to use exactly the same components for every application. 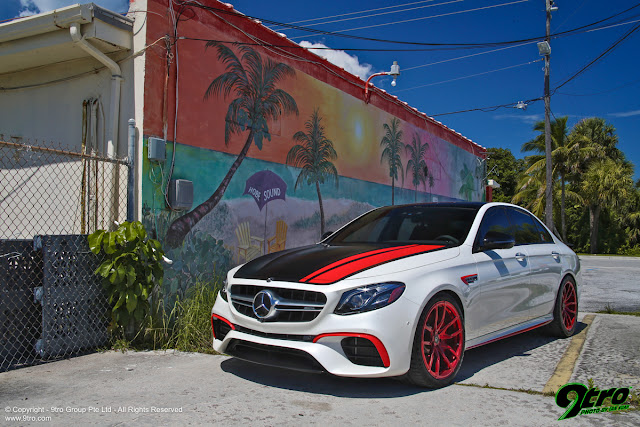 A good example of this is AMG’s bespoke M177 bi-turbo V8 motor, and the M178 dry sump variant used in the AMG GT. Apart from being the lightest engine in this segment at 209kg dry, this 3,982cc 90-degree V8 engine family that features two turbochargers in the Vee between its cylinder heads also has the highest specific output in its class as well. 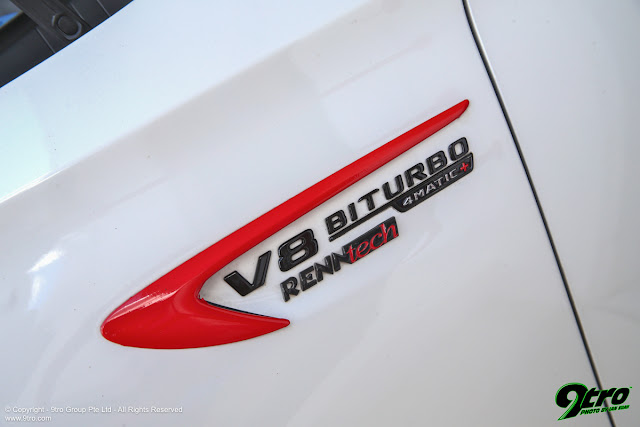 Because the turbochargers are bought in as pre-assembled units, Mercedes-AMG saves money by specifying a cheaper single scroll unit for lower power applications like the C63 AMG, whose 469hp (503hp in S form) does not require the airflow capability of the 600hp plus engines used in the E63, S63 and GT models. 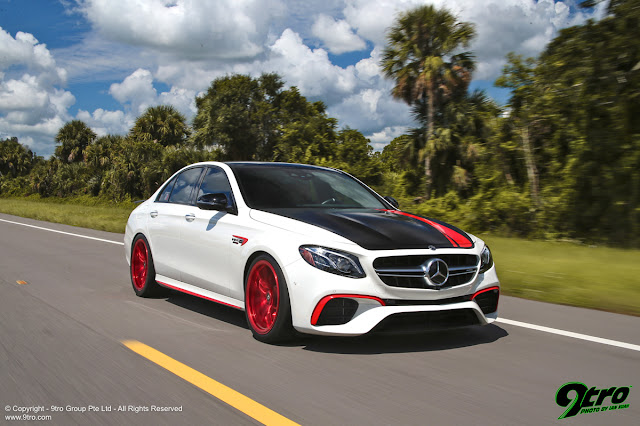 A couple of decades ago most naturally-aspirated engines struggled to reach their rated outputs, while more hand-built units like Porsche’s even used differently mapped ECU chips to come closer to their rated power outputs.

However, it is also important to consider the conditions under which power readings are taken. Individual engine dynamometers require calibration, and you also have to consider environmental parameters like ambient temperature and relative humidity on the day. The computers attached to the dynamometers use mathematical formulas to adjust for these factors along with wheel slip on the rollers and power loss through the cars transmission. 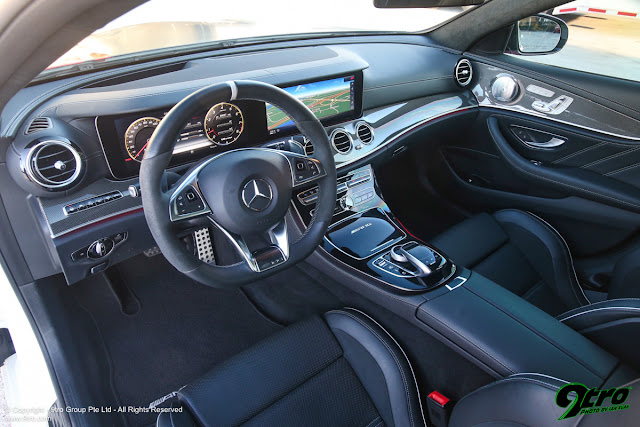 There is also the issue of how the final power and torque figures are arrived at with respect to the officially published specification. “The factory uses a calculated average within a specific power band, resulting in lower power numbers than at peak,” explained RENNtech founder and CEO, Hartmut Feyhl. 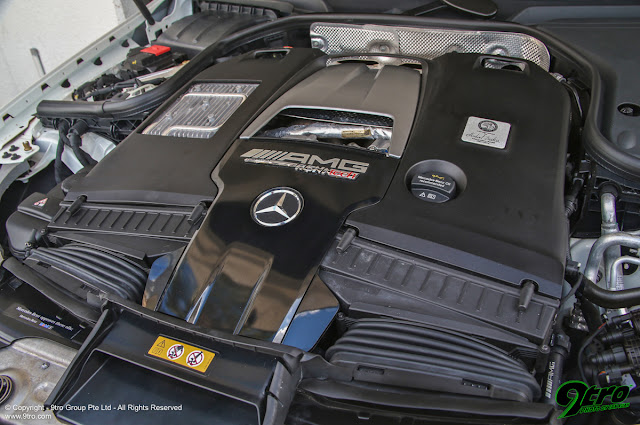 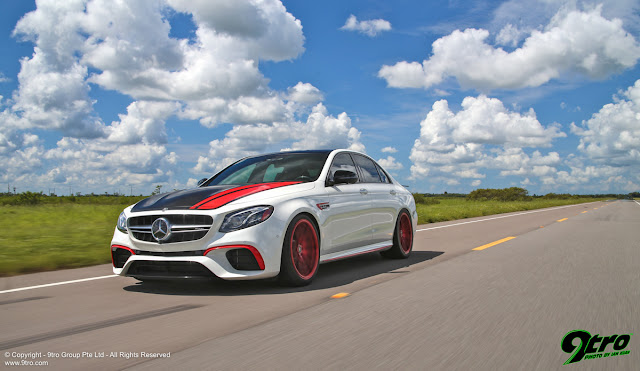 “The twin-scroll turbochargers have a lot more headroom, so there is no problem extracting a lot more power and torque,” says Hartmut. “Our Stage 1 conversion consists of an ECU remap for fuelling, ignition and boost, a free-flow air filter, and Blow-off Valve Adapter that dumps excess boost.”

Thus modified the RENNtech E63 S showed a spectacular increase in peak dyno figures to 773hp at a lower 5,600rpm, underpinned by 1,054Nm of torque at 4,400rpm. Incidentally, all of RENNtech’s quoted numbers are measured at the crankshaft, and take into account the 14% power loss caused by the four-wheel-drive system. 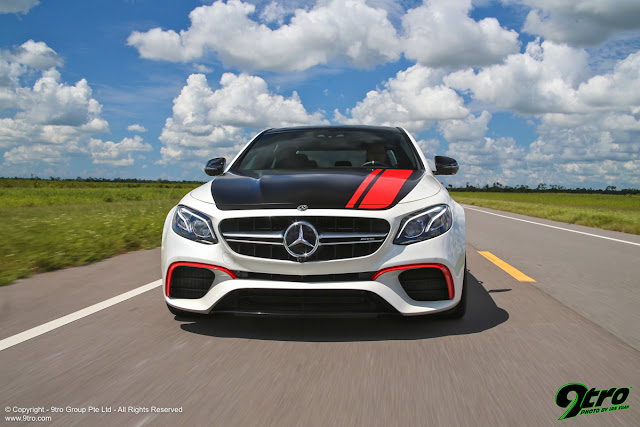 Another way of expressing power and torque is wheel horsepower, or the power reaching the driven wheels after subtracting driveline losses. Wheel horsepower is favoured by many enthusiasts in the US who quite rightly believe that one horsepower where it meets the tarmac is more significant than one horsepower measured at the flywheel.

However, wheel slip on a rolling road dyno is a significant factor, and is the main reason why wheel horsepower is normally calculated using a proven formula instead. Using this calculated method the RENNtech Stage 1 conversion delivers peak at-the-wheels output figures of 665whp at 5,600rpm, with 905wNm at 4,400rpm.

It is noteworthy that these wheel power and torque numbers that would be delivered to the tarmac by the Stage 1 conversion are now close to the peak crankshaft figures for the stock factory car! 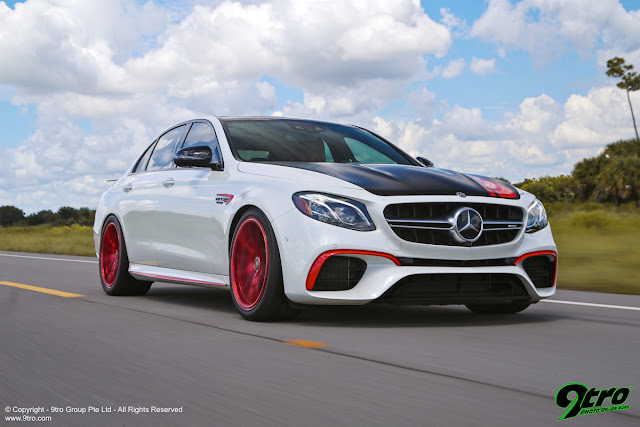 However, Hartmut is always shooting for the ultimate, and once he had taken an M177/M178 motor apart and ascertained that the internals were tough enough to take even an bigger power increase it was game on.

As the stock turbos are on their limit with the Stage 1 conversion, the extra 54hp comes from a pair of modified turbos whose scroll housings were precision machined to accept the larger turbine wheels required for more airflow. Their internal assemblies were then carefully balanced and re-assembled.

Power is one thing as it rises with engine speed. But the torque, or twisting force developed by a forced aspirated (turbo or supercharged) engine can be manipulated far more easily using ECU mapping than on a naturally-aspirated motor, where torque relies more on engine speed, cubic capacity, and the bore to stroke relationship.

Torque loads up a cars gearbox, driveshafts, and other drivetrain components, and is what provides acceleration away from rest. Since a car manufacturer has to specify every component to a price vs. strength ratio, there is only so much headroom left for the tuners.

However, as the E63 AMG has all-wheel-drive the loading on each driveshaft is considerably lower than it would be were the car rear-drive only. That said, more of the E63’s power is sent to the rear wheels in normal driving, and you can send all the power to the rear wheels in Drift Mode.

These provisos put a natural limit on the torque output of the engine, so while the RENNtech Stage 2 conversion produces an impressive 842hp at the flywheel, the torque output is electronically capped at the same 1,054Nm as Stage 1.
At the E63 AMG launch at Portimao in December 2016, AMG’s chief Tobias Moers explained that the cooling system was designed with excess capacity to keep everything within normal operating temperatures during trackdays in hot climates. “There is sufficient headroom in the cooling system to cope with our Stage 2 conversion,” said Hartmut. 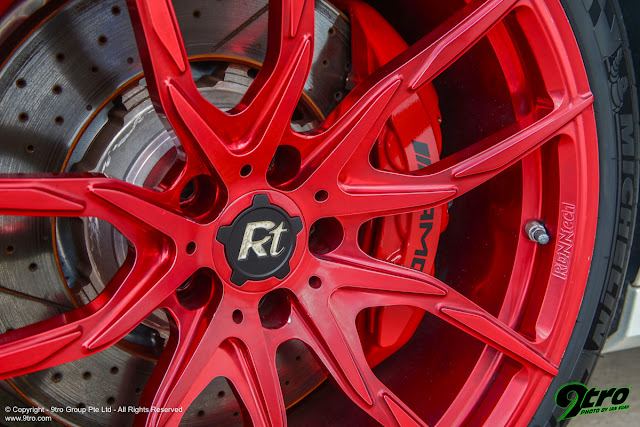 Reducing unsprung weight is always a good thing for acceleration, braking and handling, and the RENNtech E63 S benefits from a set of 10.0J and 10.5J x 20-inch forged alloy wheels made for RENNtech by Vossen down the road in Miami. These wheels are 0.5-inch wider and 1.0kg lighter per corner compared to the factory issue, and are shod with 265/30ZR20 and 305/30ZR20 Michelin tyres. 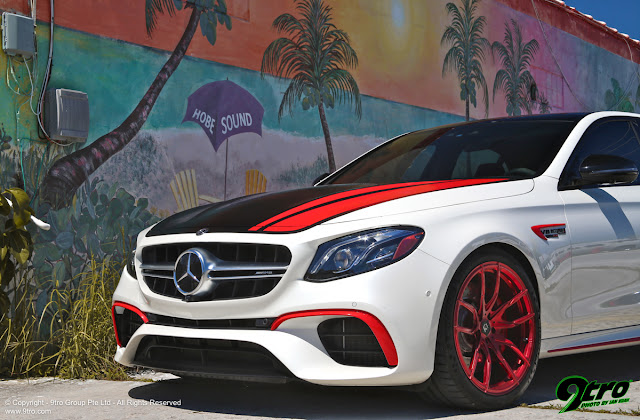 RENNtech creates an aerodynamic programme for each model for reasons of high-speed stability, extra engine cooling, and a more dynamic appearance, in that order. Their carbon-fibre components are thus no bigger and no more radical looking than they need to be. 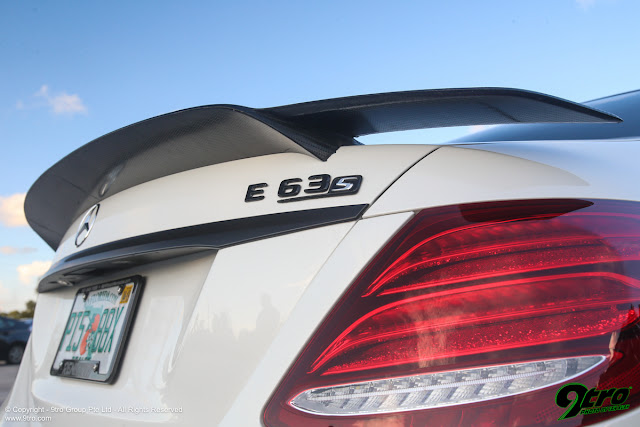 The carbon-fibre front splitter and air intake extension frames funnel more air towards the radiator and coolers while aiding lift reduction over the front axle. At the rear the middle section of the boot lid mounted spoiler extends from the trailing edge with a mild angle of attack, while its two extremes are raised clear of the cars bodywork to help clean up departing airflow. This semi-wing design has the effect of reducing drag as well as lift over the rear axle. 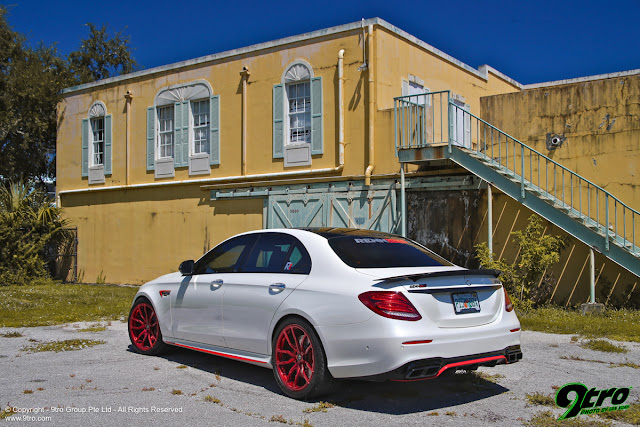 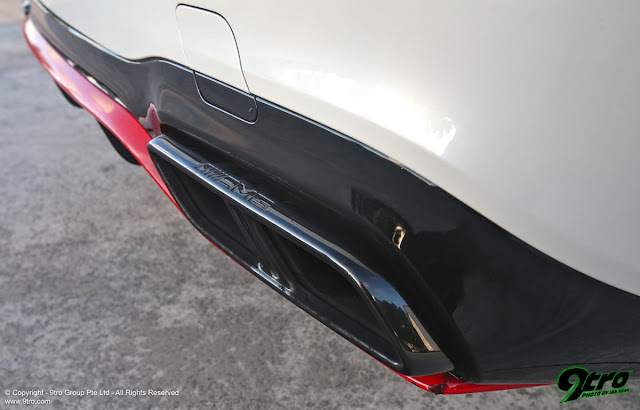 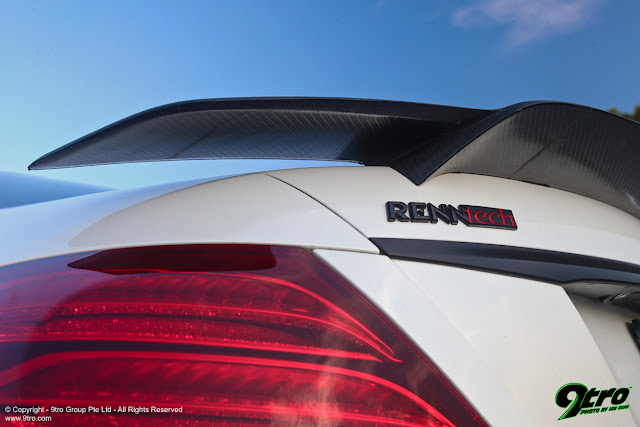 This car came pretty well specified with factory options including the panoramic glass roof, so despite all the small weight saving measures it tips the scales at 1,966kg.

This made the cars raw performance all the more impressive when RENNtech took it to Palm Beach International Raceway to be properly figured with a VBox and independent witnesses.
On a typical hot and humid Florida day the car recorded 0-60mph in 2.66 sec, 0-100mph (160km/h) in 6.134 sec, while the standing quarter mile took 10.436 sec, with a 133.45mph terminal speed. Intermediate gear acceleration was equally impressive, with 60-130mph covered in just 9.25 sec. These numbers are deep in supercar territory and not far off the 580hp and 400kg lighter Porsche 991 Turbo S, which also benefits from 4WD traction off the line.

It was still hot and humid when we drove the car in late September, but that did not worry us as we were conducting all our dynamic testing from the comfort of the driving seat with the air conditioning keeping the cabin cool.

On some long, open, and sparsely trafficked country roads the RENNtech E63 S proved to be a tarmac eater par excellence. Just a gentle tap on the throttle while cruising at 70mph in fifth gear saw 110mph registering in the blink of an eye.

When you really go into the throttle, the mountain of torque shovels real g-force into the proceedings. You are pushed back in your seat as the horizon is reeled in, and the scenery either side becomes a blur of history from a nanosecond ago./div>

The real treat however, comes when you are able to stop on a deserted straight and do the kind of full blooded launch that pits every last horsepower under the bonnet against every last bit of grip the 4WD system can muster.

Step off the brake pedal with the revs flaring and a momentary chirp of wheelspin from all four rubber patches, marks the start of forward motion that seems utterly ridiculous for a big four-door saloon. 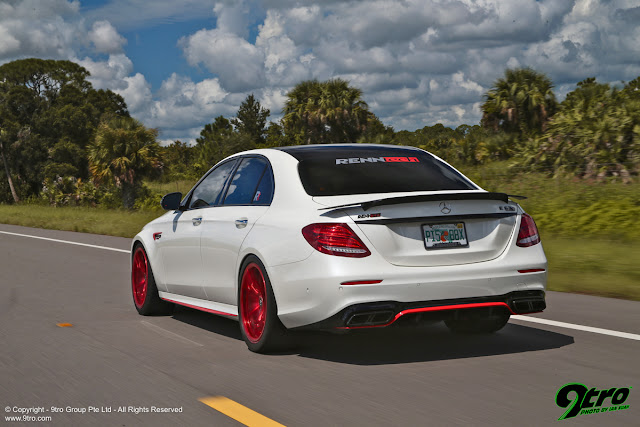 In the late 1980s a car that could break 20 seconds to 100mph was judged to be quick, while one that did it under 12.0 seconds was a supercar like the Ferrari Testarossa. Today, the McLaren 720S will do it in just 5.3 sec.

For the RENNtech E63 S to nail the 0-100mph sprint in just 8.134 sec is totally bonkers, and it will do this consistently without burning its clutch or blowing up as many fragile supercars tend to do. If the standard E63 S AMG is a perfect daily driver for someone who needs to go rapidly in comfort, then the RENNtech Stage 2 conversion is icing on the cake.