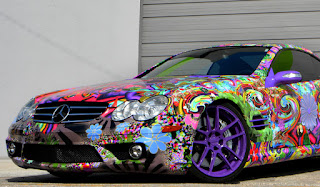 This year’s Art Basel Miami event saw the creation and unveiling of the RENNtech Mercedes SL65 V-12 by artist Laurence Gartel.  The car is a vibrant depiction and inspiration of Miami’s colorful energy depicting a fusion between the reality of nature and the cybernetic fantasy of digital imagery.

The vehicle will be traveling across the country on display at many high profile events including the 2015 Grammy Awards held Febuary 8th in Los Angeles, CA.

via emercedesbenz:
Mercedes-Benz Vans is displaying a special DJ Van from RENNtech in the lobby of Cobo Hall during NAIAS press days, just outside of the Mercedes-Benz booth. Notable Detroit-based DJ Jenny LaFemme will be providing musical entertainment to those in the vicinity on January 12 and 13. The van features a fully-functional DJ setup and a raised roof with plenty of speakers to make its presence known.
The RENNtech DJ Van was one of four vans at SEMA in November 2014 at the Mercedes-Benz Vans “Mission: Metris” display. This gathering of concept vans was designed to be a first glimpse of the Mercedes-Benz Metris, which goes on sale in fall 2015 as both a passenger and commercial van. SEMA attendees were able to vote on their favorite concept via various social media channels. The RENNtech DJ Van was the clear winner of the Mission: Metris contest due to its striking design and overall audio/visual effects, and will be shown alongside the U.S. production versions of the Mercedes-Benz Metris at their premiere at NTEA in March.
Representatives from Mercedes-Benz Vans USA and RENNtech will be on site for product walkarounds and more detailed product information. 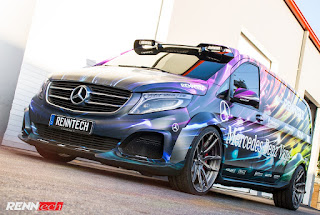 As the RENNtech DJ Van travels the country, follow it along the way with this interactive map with previous and upcoming tour dates. 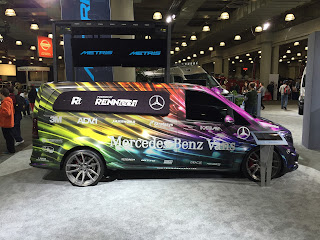