NEW BRAUNFELS, Tex., STUART, FL (February 25, 2019) – After winning the Pirelli World Challenge SprintX Pro/Am title in 2018, 18 year-old champion Parker Chase is returning to the series this week for the season opening event at Circuit of The Americas with RENNtech Motorsports. The season will kick off with a double header race event at the Austin circuit, where Chase, a Texas native, will share the driving duties of the No. 89 Mercedes-AMG GT4 with Reinhold Renger in Pirelli GT4 America‘s East Pro/Am class.

“I’m thrilled to be returning to SRO America this weekend,” said Chase. “I got the call late Friday and the deal came together very quickly. I last raced in the GT4 class in 2017, and it’s been great to watch the competition in that series grow.  RENNtech Motorsports has put a lot of effort into this first event, and I’m looking forward to working alongside with Reinhold to bring them some strong results.”

Chase’s invitation to drive for the team came less than a week before the first practice session, but the young champion aims to quickly get up to speed with the new team and new machinery.

“We were looking for a strong silver to put in the Mercedes-AMG for this first event, and Parker Chase came highly recommended,” said team owner Hartmut Feyhl. “Given his excellent record in the series and being a local to the circuit, he seemed like the natural choice for our first event of the year. We’re proud to have him on board and are excited to get this event started.”

While the 2019 SRO America season is just getting started, Chase kicked off his 2019 race season with the Rolex 24 at Daytona, where he performed well during the IMSA WeatherTech SportsCar Championship season opener, before torrential downpour and hazardous track conditions ended the race early. He gained additional track time last week with a one-day test at Sebring International Raceway in preparation for the next rounds of racing on his 2019 calendar. Chase has yet to announce his race schedule for the full 2019 season, but has held discussions in both IMSA and SRO America, with hopes to make an announcement soon.

With the return to the Circuit of The Americas, RENNtech Motorsports starts their first full Season at the same track where they celebrated their inaugural race in November 2018. Having had a successful first outing at the 24H Series, RENNtech brings a huge Momentum to the first race of the season. Proving to be a serious contender right from the get-go, RENNtech Motorsports was able to set the Pole Position time and finished the race after 24 hours just 50 seconds behind the leader in class.

Teaming up with Parker Chase is veteran driver Reinhold Renger from Rothenburg, Germany. Reinhold is a long-time factory Mercedes-AMG driver and current Chief-Instructor of the AMG Driving Academy. He scored his biggest success at the 2008 24h-Nürburgring, scoring the win in his class. He is the current Blancpain GT Series Asia champion, which he won with the Mercedes-AMG GT4 as part of the Gruppe-M Team. At RENNtech Motorsports the speed and experience of Parker and Reinhold built a dynamic duo, ready to fight for the highest positions.

Official practice sessions for rounds one and two of the Pirelli GT4 America championship at Circuit of The Americas begin Friday March 1st. The GT4 America series will host an impressive field of 33 competitors on the 3.4 mile, 20 turn, permanent road course, the arguably most prestigious race-track in North America. Race one will begin Saturday, March 2nd at 1:05PM Central, followed by race two on Sunday, March 3rd at 10:10AM; both races will air live on www.world-challenge.com. 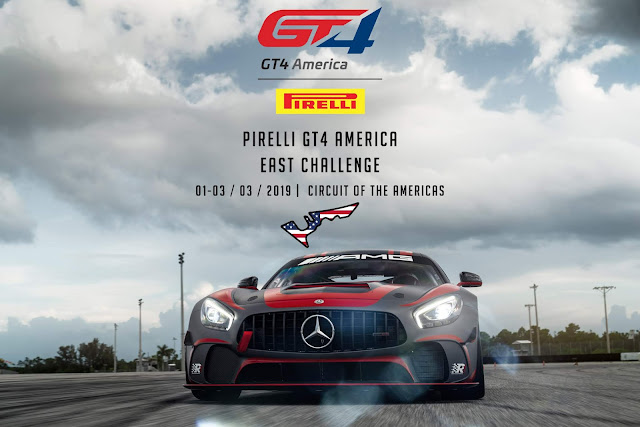